I found the recipe for this sandwich on This Homemade Life.  I was happy that I had some baby arugula sitting in my fridge and decided that this sandwich was going to be my lunch.  The arugula spread on this rocket sandwich is out of this world (I couldn't help myself)!  I know I really love something when I'm eating alone and yet I find myself talking out loud, telling someone who isn't really there, how amazing my sandwich tastes.  It really was that good! 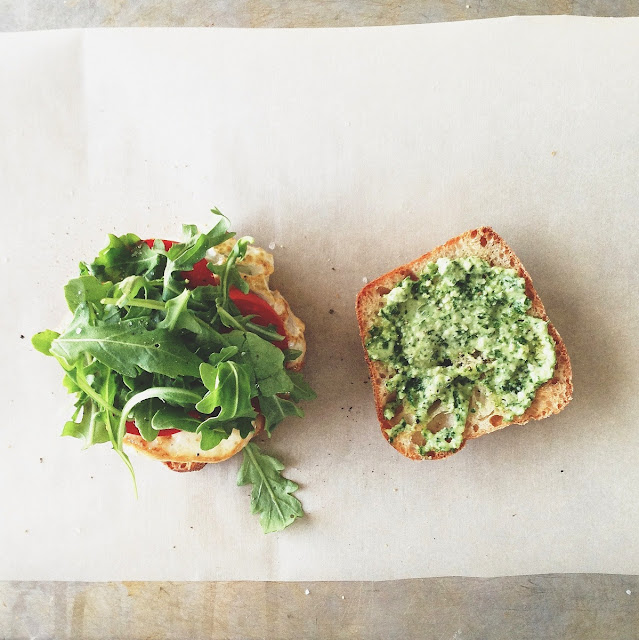 Blend arugula, a good squeeze of lemon juice and garlic in a food processor until finely chopped.  Stream in olive oil until well blended.  Transfer arugula mixture to a bowl and stir in parmesan cheese and mayonnaise.  Season with kosher salt and freshly ground black pepper to taste.  Spread arugula spread on cut surfaces of the ciabatta bun.  Place a cooked egg on bottom half of bun followed by sliced tomatoes, a sprinkle of good salt and some baby arugula.  Place top half of bun on top of sandwich and bite into some serious goodness!

Recipe from This Homemade Life

This recipe for flatbread is super fast and super easy.  My little family has been eating flatbread "pizzas" once a week since I came across this recipe on Food Loves Writing.  The dough comes together in just a few minutes and in no time at all, a delicious dinner can be on the table.  I love a meal that comes together quickly, that everyone loves and taste amazing!  Like pizza, the combinations seem endless and awesome.  With peaches being in season, I decided to use some of the same toppings from one of my favorite pizzas that is topped with mozzarella and when pulled from the oven, topped with fresh sliced peaches, basil and a drizzle of reduced balsamic vinegar.  This meal is seriously so fast to make and seriously so good to eat! 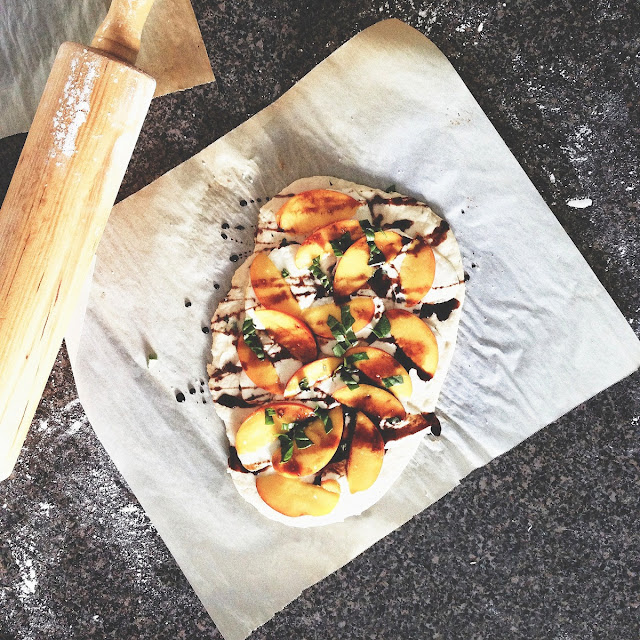 Place a pizza stone on the middle rack of the oven.  If you don't have one, just put in a baking sheet.  Preheat oven to 450 degrees F.

In a medium sized bowl combine the flour, baking powder, salt, and fresh basil.  Make a well in the center of the flour and add the water and olive oil.  Stir with a wooden spoon until the dough comes together.  Remove dough from the bowl and knead a few times to form a smooth round of dough.  Divide into two pieces.  Roll out each piece of dough on a piece of parchment paper until thin.  Brush dough with olive oil, top with fresh mozzarella and a sprinkle of good salt.  Bake flatbread until the edges are just golden in color, about 10 minutes.

*Last night I tried a fig jam, white cheddar, bacon and arugula combination that was amazing!  I also tried using all whole wheat flour and it totally worked with the addition of a little extra liquid, but next time I think I will use half whole wheat and half white. (I left the basil out of the dough for this combination.)

When I think of chocolate milk, two things come to my mind.  The first is the giant container of Nestle Nesquik chocolate powder that lived in the kitchen cupboard while I was growing up.  Not only did that chocolate powder get stirred into milk, but was often sprinkled, quite liberally, on top of vanilla ice cream.  The second is the number of times (which may be countless at this point) my kiddies have talked my husband into buying them chocolate milk at the gas station or grocery store (I don't think they have to do too much talking into).  When my now nine year old was in preschool, I would drop him off at school and he would tell me to have Dad pick him up.  He was smart and knew if Dad picked him up; it meant a trip to the gas station on the way home was far more likely than if I picked him up.

Not long ago, I came across a recipe for homemade chocolate syrup and decided to change it up a bit.  I made it healthier by using honey and agave instead of white sugar.  Whenever I can change something we are eating (or in this case drinking) for a healthier version, that my kiddies like even better than the not so good stuff, I say it’s a win all around.  This chocolate syrup makes chocolate milk that is chocolaty, not as super sweet as Nesquik, and is very easy to drink really fast with a straw, especially when it is icy cold.  Needless to say, this past week, we've been drinking a lot of chocolate milk around this house of mine. 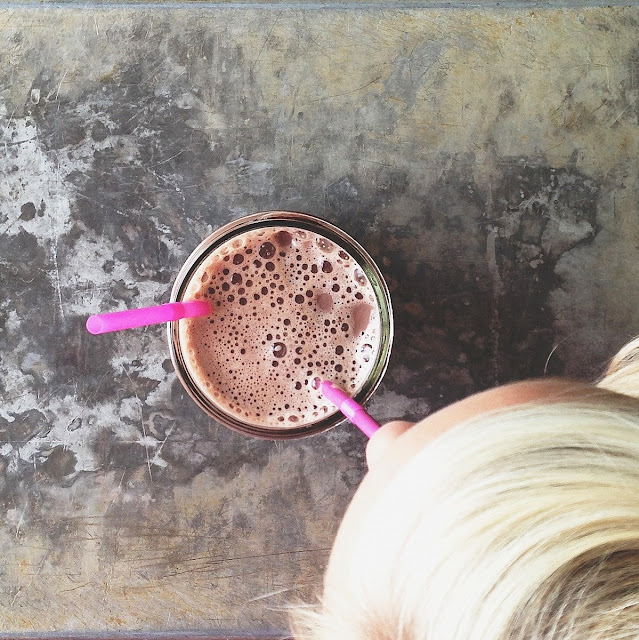 In a medium saucepan whisk all of the ingredients together until there are no lumps.  Bring chocolate mixture to a boil over medium heat.  Reduce heat and simmer until chocolate syrup has slightly thickened.  Remove from heat and stir in vanilla extract.  Pour into a glass mason jar and let cool to room temperature; cover and refrigerate.  Stir a spoonful or two (maybe three or four) into a cup filled with milk and ice and stir vigorously.  Drink and enjoy!

*You could use all honey instead of the 1/4 cup agave.  My honey has a stronger honey taste and I wanted to tone it down by using some agave.  I added the extra 2 tablespoons of pure maple syrup for a little extra sweetness, but could easily be left out.
Posted by breanna No comments: