I'm finally seeing the light after fighting congestion, a cough, and fever for nearly two weeks.  I haven't felt quite like myself.  Often I fall asleep at night thinking about what I want for breakfast the next morning, but with this bout of sickness there hasn't been a lot of food thinking and breakfast has consisted mostly of Rice Chex.  Nothing has really sounded all that great and pouring a bowl of cereal takes very little energy which is good because I seemed to be lacking in that department.  This past Friday I was feeling a bit better and with a little more energy under my belt I made an oatmeal soufflé for breakfast (mostly I did it because the Rice Chex were gone).  It sounds fancier and more difficult than it really is.  It actually comes together pretty quick and was a perfectly delicious start to my morning.  I halved the recipe with the intention of eating half the soufflé.  I sat at my kitchen counter eating the first half and then while I was talking on the phone with my sister the second half managed to disappear as well.  The next morning I made full recipe and was surprised that all of my kiddies LOVED it!  So here's to feeling better, an oatmeal soufflé, and happy eaters! 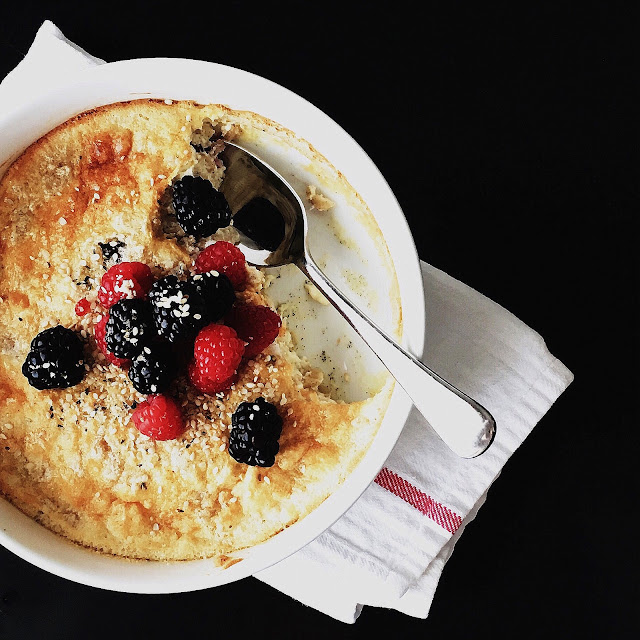 
In a large saucepan, combine the oats, milk, salt, sugar, and seeds of the vanilla bean.  Over medium heat bring the oat mixture to a gentle simmer, stirring occasionally.  Cook for 15 minutes or until the oats are softened and the mixture begins to thicken.  Remove the pot from heat and let cool slightly.


Separate the eggs.  Once the oats have cooled a bit, working quickly, whisk in the egg yolks completely.  With a stand mixer or electric beaters, beat the egg whites until medium-stiff peaks form.  Gently fold the egg whites and lemon zest into the oat mixture until just combined.  Pour the mixture into the prepared baking dish.  Gently dot the top of the unbaked soufflé with a handful of berries and lightly push each berry down﻿ into the mixture a bit.


Bake for about 30 minutes or until puffed and golden.  Remove from oven and brush the top of the soufflé with pure maple syrup.  When serving, top each serving with fresh berries, hemp seeds and/or sesame seeds, a splash of cream, and light drizzle of maple syrup.  The souffle is best when eaten soon after it comes out of the oven.


*I bought some thick cut oats, but they didn't really look that much thicker than my regular rolled oats.  It only took about 10 minutes for my thick cut/regular oats to soften.

Email ThisBlogThis!Share to TwitterShare to FacebookShare to Pinterest
Labels: breakfast